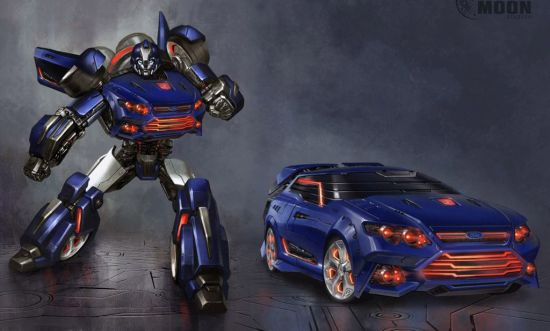 Ford’s Australia based subsidiary, Activision, recently launched the Transformers: Fall of Cybertron – a sequel to the 2010 video game Transformers: War for Cybertron. In order to commemorate the release, Activision has given fans a chance to imagine their own transformer. Dubbed as Falcatron, the Ford Falcon Transformer is an Autobot and is designed with suggestions from the automaker’s fans who gave input while keeping in mind the questions asked by Ford. The questions include which model should serve for the civilian mode as well as what color scheme should it have and should it be a Decepticon or an Autobot.

The fans suggested high-performance Ford Falcon XR6 Turbo, which is Australia’s original muscle car. It comes equipped with turbocharged 4.0-liter straight-six engine generating 362 ponies that powers the rear wheels of the car. Fans came up with more than 1000 entries and the whole proceeding was handled through Activision’s social media presence.

Transformers developer High Moon Studios created the design concept, pictured above, and maximum fans voted for it. For its transformation into an Autobot, the concept is colored in traditional Ford deep blue and gets aggressive bodykit as well as a weird hatch design at the rear.

Ford confirmed that it plans to use the Flacatron in some promotional materials, but don’t expect it to be featured in Transformers 4. Because by the time it comes, the Ford Falcon XR6 Turbo might be out of production.