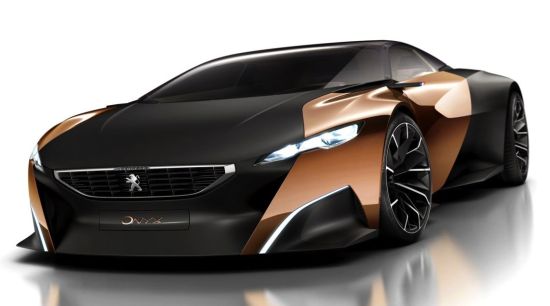 Another vehicle that appears before its debut at 2012 Paris Motor Show is Peugeot Onyx sports car concept. Earlier, the French manufacturer released the teaser of the concept car but just hours later the full specs and images of the Peugeot Onyx sports car concept leaked online, clearly giving an insight into what the all-wheel drive coupe is to offer.

To be revealed at the 2012 Paris Motor show later this month, the Peugeot Onyx sports car concept appears to be the most fuel-efficient and powerful Peugeot ever produced. The reason being, Onyx concept is to come with rear mounted 1.6-litre turbocharged petrol engine capable of developing 191kW, which is further mated to 89kW electric motor located on the front axle. The combination takes the power tally to a whopping 280kw (375hp). The extensive use of lightweight carbonfibre in its body parts makes it lightweight to get an average fuel economy of 4.0 liters per 100km.