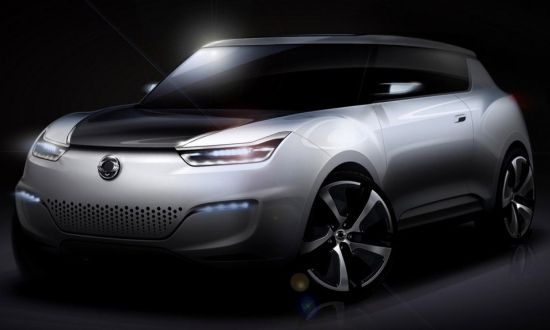 While the coveted 2012 Paris Motor Show is round the corner, news about automakers giving a sneak peek or revealing their vehicles ahead of their debut has started pouring in. The next in line is from Korean automaker SsangYong. The vehicle is called e-XIV (Electric-Exciting user interface vehicle) and the concept borrows design cues from SsangYong’s XIV-1 and XIV-2 concepts.

What is considered the hybrid version of XIV-2 concept revealed at 2012 year’s Geneva Show, SsangYong e-XIV concept can run on electricity and uses a small gasoline engine to charge the batteries, thus proving extra juice for the vehicle to cover more miles everytime. Not only is this but the e-XIV concept harvests solar energy with roof top mounted solar panels to produce extra electricity to charge the battery. The whole system helps overcome the short driving range and battery charging issues to some extent.

Measuring 163.8 inches in length, 70.5 inches in width and 62.0 inches in height, SsangYong extended-range electric crossover concept is identical in size to Mini Countryman. Design wise, the concept may not look too attractive to purists. Nevertheless, it flaunts several clever flourishes and lines from the hood superbly flow into the beltline as well as a line from the rear fender goes around the curved tail.

With oversized wheels and a height above five feet that give it an SUV look, e-XIV concept features rounded front LED lights, slightly descending roofline, glass roof for extra visibility and wraparound DLO contrasted by the large, trapezoidal C-Pillars. The detailed information about powertrain and other features isn’t available as of now and they are expected to go public during press preview for the 2012 Paris Motor Show scheduled to take place on 27th of September.