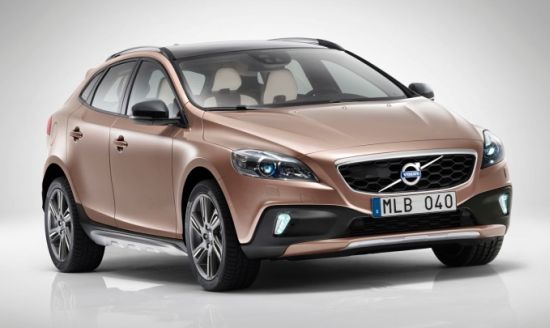 As 2012 Paris Motor Show is inching closer with each passing day, the list of vehicles revealed ahead of their debut is getting longer every day. The new addition is Volvo’s V40 Cross Country, which is the crossover version of V40 hatch. The V40 Cross Country will join V40 R-Design model at Volvo’s booth in Paris.

Volvo V40 Cross Country crossover will be available in three diesel and two petrol engine options. The diesel engine options include a 115 HP 1.6-liter, 177hp 2.0-liter D4 turbodiesel engine and a 150 hp 2.0-litre D3. All the models will be connected with six-speed automatic transmission or a six-speed manual gearbox.

The most powerful model of the Volvo V40 Cross Country is T5, which will come with either a 254hp 2.5-liter five-cylinder engine or a 2.0-liter five-cylinder engine capable of producing a peak output of 213hp. The 254hp engine model will be able to hit 0-60mph in six seconds and offers a combined fuel economy (EU cycle) of 34mpg. Another model in the lineup is T4 that will come with either a 1.6-liter GTDi engine that develops 180hp or a 2.0-liter that offers the same output. The combined fuel economy ratings will remain at 51mpg while the CO2 emission is at 129g/km. while the T5 will be aligned with six speed automatic transmission, the T4 will get either a six-speed automatic powershift transmission or a six speed manual gearbox

Inside, Volvo V40 Cross Country has enough space to seat five people comfortably and you will find leather upholstery which is available in five different colors. Its rear seats as well as front passenger seat folds to open more space to put more luggage inside. What Volvo calls as the ‘smart storage’ is a storage compartment beneath the armrest can store CDs and the connector for a USB/iPod. Also, the Electronic Climate Control system and drained storage unit completes the package.

The US customer might surely be disappointed as the total volume of 17000 Volvo crossover units to be developed every year will be divided in 50:30 ratio to European and Chinese Markets. No price details are available as of now.