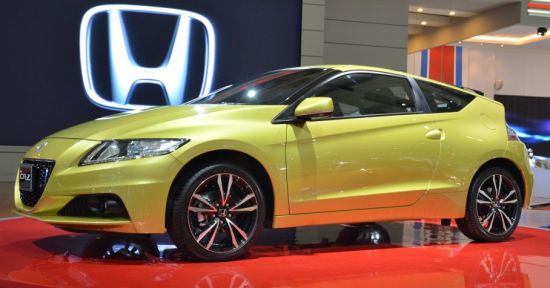 It was just a couple of days back we reported that Honda will premier CR-Z hybrid at 2012 Paris Motor Show. However, going against its own words, the Japanese automaker has premiered 2013 Honda CR-Z hybrid at Indonesia International Motor Show in Jakarta. Honda CR-Z Hybrid appeared with considerable changes, to know what they exactly are, hit past the jump.

Talking about the powertrain, the earlier hybrid setup of CR-Z was rated at 122hp and 173 Nm of peak torque. The refreshed Honda CR-Z hybrid has the same old 1.5-liter inline-four heartbeat combined with Honda’s Integrated Motor Assist Hybrid technology. Engine transfers 118hp of power to the wheels when connected with six speed manual gearbox and 116hp of power with Continuously Variable Transmission. The electric motor adds 20 more ponies to the power tally. Though there is no word from Honda on the combined output and the full details are expected to come with its debut at Paris.

The other features that set it apart from the previous model include a revised front bumper, redesigned front grille sans vertical bar, HID headlights with running lights, door mirrors and rear diffuser has been reshaped, LED tail lamps and 17” alloy wheels. Inside the cabin, you will find two-tone red and fabric for the seats and the tachometer in the instrumental panel illuminates in three different lights i.e. blue, red and green colors based on driving mode (Normal, Sport and ECON) you have chosen. Additionally, the engine and motor offers more performance with ‘Plus Sport System’ that functions through S+ button placed on the dash but for that more performance, CR-Z might sacrifice some of its green credentials.

Furthermore, the 2013 Honda CR-Z Hybrid to come with a safety package that include ABS system, EBD and brake assist, VSA, active headrests and air bags on front, sides as well as on side curtain with occupant position detection sensor. The car will be up in various color options that include White Pearl, Crystal Black, Milano Red, Premium Energetic Yellow Pearl and premium Northern Lights Violet. More updates are expected with its debut at Paris Motor Show.