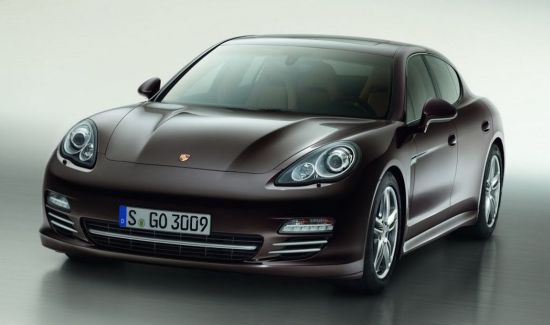 While the Porsche fans have to wait little too long for the second generation Panamera, but that surely doesn’t mean the brand has ceased to entertain its ever growing fans. Well, yes the diehard fans can remain content with many iterations of the current model that are on way. One of the much talked about iterations is a special Porsche Panamera Platinum Edition for the year 2013.

Based on the Panamera and Panamera 4 versions, 2013 Porsche Panamera Platinum Edition, however, is all about styling and there won’t be any changes under the hood as such. So, the enthusiasts who are waiting for a more powerful Panemera will be little disappointed to find the same 3.6 liter engine under the hood. The engine is capable to produce 300hp and 295 lb-ft of torque which enables it to get a top speed of 160mph, with its fuel economy estimated at 27mpg.

Talking about the exterior and interior of 2013 Porsche Panamera Platinum Edition, it’s already an impressive car offering that exhilarating driving experience and fun. However, Porsche has updated the already unmatchable exterior and strived to combine comfort, sportiness and four-seat capacity, all in one package. The exterior updates can be witnessed in the form of platinum silver paint used on the front end, side air outlets, exterior mirror and finned rear diffuser, while the high gloss black contrast the silver and can be found on the side window trims. 2013 Platinum Edition rides on a set of 19” Panamera Turbo alloy wheels and also features bi-Xenon headlights.

Inside, Porsche Panamera Platinum Edition will borrow many elements from the standard model and it combines the business with sportiness. One can find SportDesign steering wheel and leather trim for interior parts combining black with luxor beige. Additionally, the Panamera Platinum Edition will come with 7-inch TFT touchscreen display, Bose audio system with fourteen loudspeakers having a combined output of 585 watts and Porsche communication Management with built-in navi unit as standard.

The special edition Platinum Edition will be available in five color options that include black, white, basalt black metallic, carbon grey metallic and mahogany metallic lacquer. The special edition will go on sale on January 5 2013 with a price tag of $81,475 for the 2013 Porsche Panamera Platinum Edition and $85,575 for the all-wheel drive Panamera 4. The quoted prices include a $975 shipping charges for each.