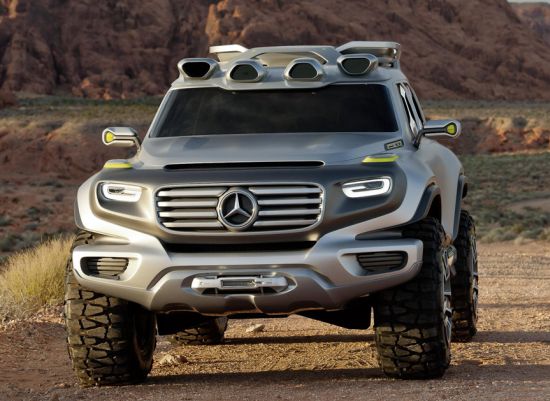 The LA Auto Show hosts a design challenge every year wherein the automotive designers from all over the world are asked to give free rein to outline the ideas for the future of transportation. This year’s theme is ‘how the law enforcement rides of 2025 might look like’. With the intention to kill the proverbial two birds with one stone, Mercedes-Benz has developed a futuristic interpretation of its iconic G-Class for LA Design Challenge which will be shown at the 2012 LA Auto show later this month.

Inspired by the G-Force, the concept is christened as Ener-G-Force and flaunts the futuristic and muscular form and also shares some lines with the current G-Class. On the other hand, the sunk-in headlights, built-in police lights, low rectangular taillights, flat roofline, bull bar incorporated in the grille and 20” off road wheels are among Ener-G-Force’s prominent features. As the vehicle is imagined for the year 2025, it is but obvious that it’s going to be eco friendly. Yes, you read it right. The Ener-G-Force gets power from hydrogen fuel cell providing vital juice to electric motors in each wheel and a hypothetical range of 500 miles with water as tail pipe emission.

As the vehicle is intended for the 2012 LA design challenge, Mercedes-Benz puts some unrealistic details to the Ener-G-Force concept like roof rack that which works as tank to store the water produced by cells which is transferred to the converter that generates Hydrogen. The space for an extra tire in conventional vehicles is filled with tools and a roof mounted scanner that adjusts suspensions as per the terrain. Mercedes-Benz Ener-G-Force is one of the six entries for the LA design challenge and the winning design will be announced on November 29 as a part of the LA Auto Show.