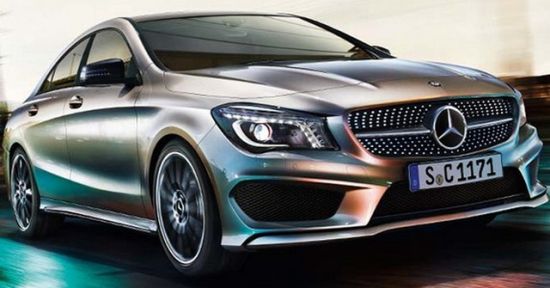 After recurrent spy shots of Mercedes-Benz CLA appearing on the web for the last one year, the official photos of German automaker’s new compact sedan appear well ahead of its official unveiling at 2013 Detroit Auto Show. Sharing its platform and looks with the new A-Class, the baby CLS still remains distinct with its rear end borrowing heavily from CLS as well as some design cues taken from the Concept Style Coupe revealed at Beijing Auto Show this year.

The base model of the Mercedes-Benz CLA will be front-wheel drive; rumors have it though that an all wheel drive version is on cards as soon as CLA45 AMG variant (with 2.0-liter four-cylinder engine rated at 325hp) becomes a reality. Engines choices are also expected to be borrowed from A-Class with 1.6-liter and 1.8 liter gas engines outputting from 107hp to 211hp.

As per autoblog.nl, Mercedes-Benz CLA will have four variants including CLA 180 with a power output of 122hp, CLA 200 developing 156hp, CLA 250 that churns out 211hp and a diesel engine 220 CDI with 170hp which hopefully won’t make it to the US market. The transmission choices for the interested buyers will include six-speed manual and a seven speed dual clutch automatic as standard.

The interior of Mercedes-Benz CLA is identical to A-class and will feature Mercedes’ iPhone support with Siri connectivity, command infotainment and ‘pre-safe’ collision avoidance system. Mercedes-Benz CLA is expected to hit US showrooms by the middle of next year as 2014 model. No details about performance and price are made available as of now.