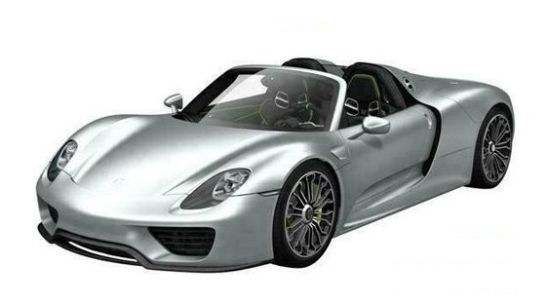 The power figures and performance credentials of Porsche 918 Spyder were made public after it was unveiled at the 2010 Geneva Motor Show. However, we have had the fresh images of the first hybrid supercar coming to the fore through Porsche’s market brochure in September this year, giving the possible buyers a chance to know what they should expect once the car hits showrooms in late 2013.

This time around, the photos of final production Porsche 918 Spyder model leaks yet again from the patent that German automaker applied for the Chinese auto market. If we trust these are the images of production version, then we have to say that Porsche hasn’t done too many changes to concept version we saw lapping the ring. The differences, however, can be spotted in slightly different front fascia, door handles, mirrors, indicator lights, seat belts and revised air intakes at front bumper.

The production version of the Porsche 918 Spyder is to come with advanced plug-in hybrid powertrain consisting of a 4.6-liter V-8 engine outputting 580hp and 369 lb-ft of peak torque. Engine will be assisted by two electric motors collectively developing 243 hp thereby taking the power tally to a whopping 823hp. Aligned with seven speed dual clutch transmission, Porsche 918 Spyder is to get a sprint from zero to 60mph in less than three seconds with its top speed in hybrid mode at 202mph and 93mph in electric only mode.

Porsche 918 Spyder offers electric only, gas only or hybrid modes of driving to get a fuel economy of 78.4 mpg (US) and CO2 emission at 70 g/km. In the electric only mode, the pair of electric motor gets vital juice from 6.8 kWh lithium-ion battery pack that enables it to cover 25 miles. The production of the first hybrid super car is to start in September 2013 with its deliveries expected to begin by the end of the same year. The price of the car isn’t confirmed as yet but you can expect it to come somewhere close to USD 1 Million.