The Frankfurt Motor Show is just around the corner. The 12th of September is the date when automakers will reveal their latest innovations. We’re bound to see plug-in hybrids, race cars, and upgraded versions of the cars we drive around. Industry experts and auto lovers are waiting to see what the show will reveal. Here is a small peek at the Frankfurt Motor Show 2019 highlights:

Frankfurt Motor Show 2019: All you need to know

The Frankfurt Motor Show, also known as the International Automotive Exhibition is famous for revealing the latest concepts and innovation. It’s held on alternate years in Germany, and it started in the year 1897, where only eight cars were displayed. With time, the show has become the biggest automobile show in the world, with a footfall of over 800,000 visitors in 2017. This year too will draw big crowds no doubt, who will come from near and far to witness the grandeur of the world’s biggest car show. We have compiled a little of things you can expect to see from the biggest automakers for you, from Hyundai, Volkswagen, Mercedes, Porsche and so on. 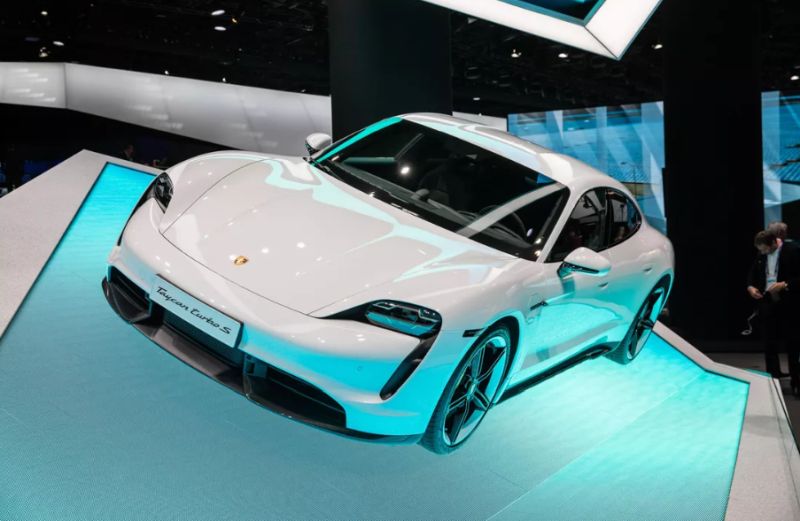 One of the latest update at the Frankfurt Motor Show 2019, will be from Porsche. We love Porsche for the sleek, smooth designs which are breathtaking. The company has now ventured into the electric car segment with its Taycan. Incredibly, the car will carry on the legacy of Porsche in terms of speed, as it can hit 100 km per hour in just 3.5 seconds, and top speed of 250 kmph. It would most probably have a 90kWh battery-pack with fast charging capacities and a range of 500 km. Pretty impressive for an electric car! 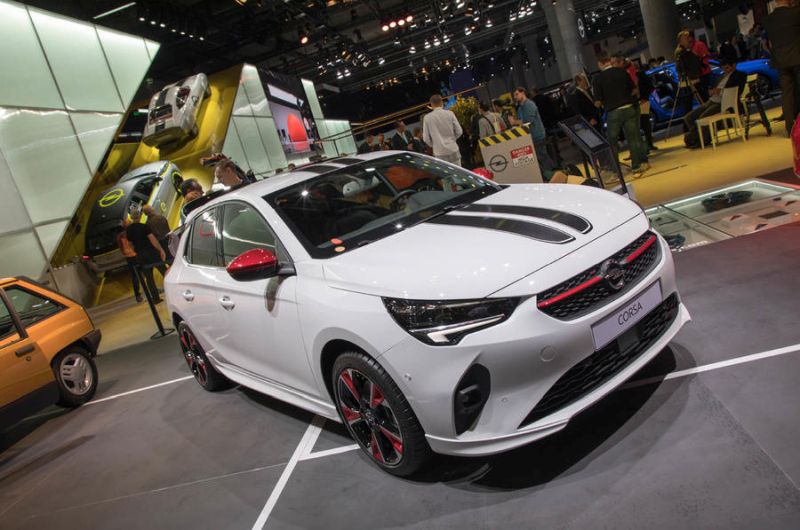 Opel Corsa-e is another of the electric cars at the Frankfurt Motor Show 2019 which will be unveiled. It’s not just another electric car – it’s a rally car, the world’s first ever all-electric one. It’s now available for order, but the premiere would be at the Frankfurt show. The car is ready to compete at the ADAC Opel e-Rally cup, which is also the first rally cup for e-cars.

In past years, the competition has seen the world’s best 100 drivers competing to win the grand prize, who gather from 18 countries, and the fastest talent in the junior segment has also participated in the ADAC Opel Junior Rally team.

In fact, the Opel Juniors won for four years straight, from 2015 to 2018, competing on the Opel Adam R2. The Opel Corsa-e will replace the ADAM in the rally stage from now, according to the company. The Corsa-e has 136 hp with the capacity to develop 260 Nm torque from standstill.

Opel has designed the new all-electric car as a fun car which can be driven on an everyday basis, as well as a rally car. It is being advertised as an affordable electric car which can do double duty as a car suited for daily use as well for motorsport. The car would be able to compete in the German Rally championship and other events.

The company is focusing on providing support for junior drivers in mainstream motorsport with this car. This e-car is the latest update in the Frankfurt Motor Show 2019 from Opel. The company will provide a ‘pyramid’ of support with the ADAC Opel Rally-e Academy, which was established in the year 2016. After graduating from the Academy, the best junior drivers would go on to compete in the European Junior Rally Championship, and would showcase the amazing capabilities of this innovative fully electric rally car. 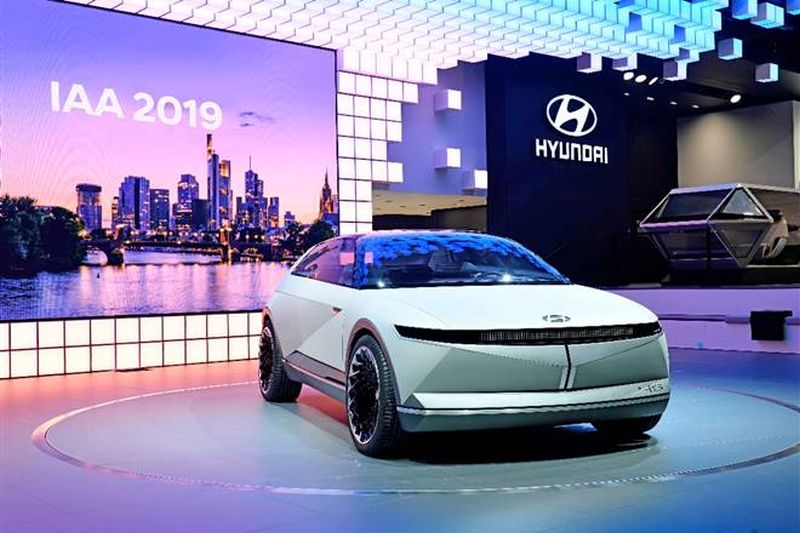 Hyundai would be displaying quite a few of its electric cars at the Frankfurt Motor Show 2019. One of them would be the ‘45’. Watch out for the distinctive styling of the car, as the company claims it accentuates the ‘sensuous sportiness’ of Hyundai. The car would have a sleek multifunction steering wheel, touch sensitive panels and an impressive digital display, replacing the earlier digits as well as gauges.

Hyundai has other electric cars, such as the Kona EV and Ioniq, lined up to be displayed on schedule at the Frankfurt Motor Show 2019, with a preview for the media on the 10th of September, 2019.

The Korean automaker will reveal for the first time, the Hyundai i30N Project C at the world’s mega-event for cars. What can be seen from the sneak peeks the company has released to the media has piqued the curiosity of all car lovers. As far as we can gather, the car would be lightweight, yet have a harder core. The weight would enable it to participate in races with ease, as it will be able to do more laps. 600 units of the car are being produced with eyes on the left-hand drive market in Europe. 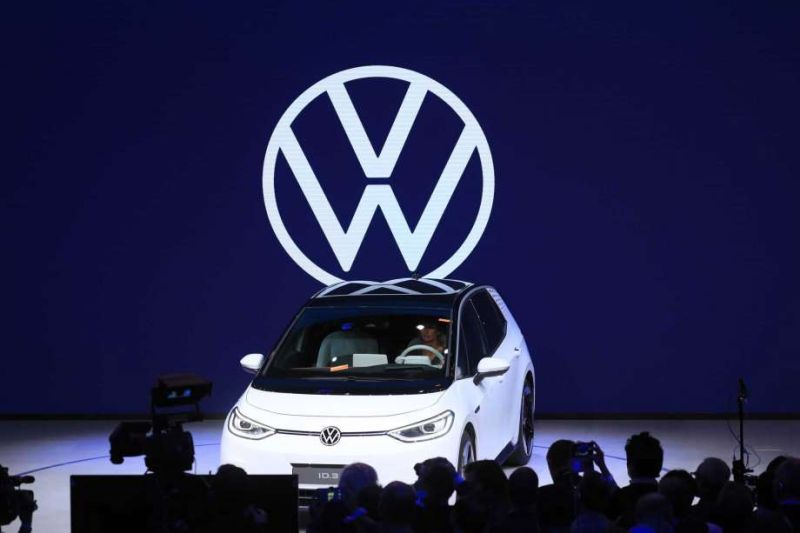 Ready on schedule for the Frankfurt Motor Show 2019, is Volkswagen’s new logo. The company decided to update the logo as the earlier was too ‘unemotional’ and German. Though Volkswagen has always insisted on being too German, times are a-changing and it probably has decided that a global look would help it do better in an increasingly smaller world.

The instantly recognizable blue-white 3D bubble logo will be replaced with a flat and simple, minimalistic logo, in black and white, according to Autoweek. The B/W logo will stand on cars of any color, and have a 60s vibe.

It may be just a simple change, but the logo change will affect all the markets, starting from the European market, then China, North and South America and other countries. Approximately, 70,000 logos will be  changed.

Change in the logo design is part of the Transform 2025+  design strategy adopted by Volkswagen in 2015. The automaker will be concentrating on the roll out of its e-mobility as well as digitalization. The move will include the realignment of the company’s customer communications. The rebranding of Volkswagen which will be kicked off at the Frankfurt Motor Show 2019 will be one of the biggest in the industry. 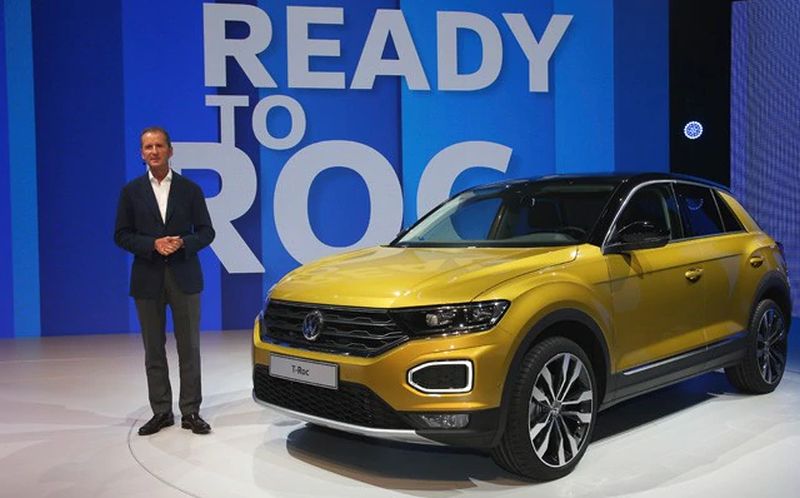 Volkswagen has more to reveal at the world’s biggest auto show – its revamped T-Roc SUV, the T-Roc Cabriolet. It is an emotive and extroverted design, claims the company, and will be displayed in public for the first time in the Frankfurt 2019 show.

The Cabriolet has unique design elements such as the striking rear end design without any rear doors. Structural strengthening of the underbody, windscreen frames, cross members, side panels and doors would enhance the functionality of the car. It is expected to score 5 stars, same as the hard-top T-Roc in the Euro NCAP tests (crash).

The soft top will be operated with a mechanism to the earlier one, but now will be stored under an exposed compartment on the boot, rather than slide back into a panel. It, therefore will be one of the fastest opening roofs in this category, retracting in just a few seconds. The driver just has to simply press a switch on the central console/key, when the vehicle is at the speed of 30 kmph or less.

Volkswagen has made many alterations to the roof’s design, making it more space efficient – the two rear seats will be easily usable, with enough leg room for people taller than six feet. No need to sit hunched up or squeeze yourself in this vehicle. If you love convertibles, then this one might be just right for you, with so many attractive features. The company claims the car is silent enough, as it has specially developed roof and door seats.

The Cabriolet will be available only in petrol engines, and diesel engine seems to be unplanned right now.

The Frankfurt motor show 2019 is the perfect venue for automakers to display their latest upgrades, which every year seem to lift the benchmark a bit higher. This year’s show is going to be quite exciting as well with all the leading automobile manufacturers of the world gearing up to reveal the best in cars.

Skoda Octavia’s latest design in the interiors will be a stunner for sure, as can be seen from the few leaked images. There’s a smashing infotainment system and two-spoke layout of the steering wheel.

The company has kept the changes hush-hush and made only a few details public. The interiors have been redesigned, with steering mounted controls, similar to the one in the Vision X Concept. The design theme is minimalist, with only a few buttons on the dashboard. The main feature which is highlighted is the futuristic infotainment design, as all the utilitarian features, such as the AC vents, have been repositioned underneath its infotainment system. The fully-digital instrument cluster gives the interior a glamorous look.

The exterior styling has been revised too, to keep the design harmonious with the company’s new design revamp, as can be seen on the Scala and Kamiq. Skoda has ditched the grille design as well as the split headlights for a traditional look. The grille too is going to be wider and sleeker. The notchback design will be continued, however. The next gen Skoda will be launched in international markets in 2020, and is expected to compete with the Hyundai Elantra and Honda Civic in countries like India.

Audi Sport and Audi A3 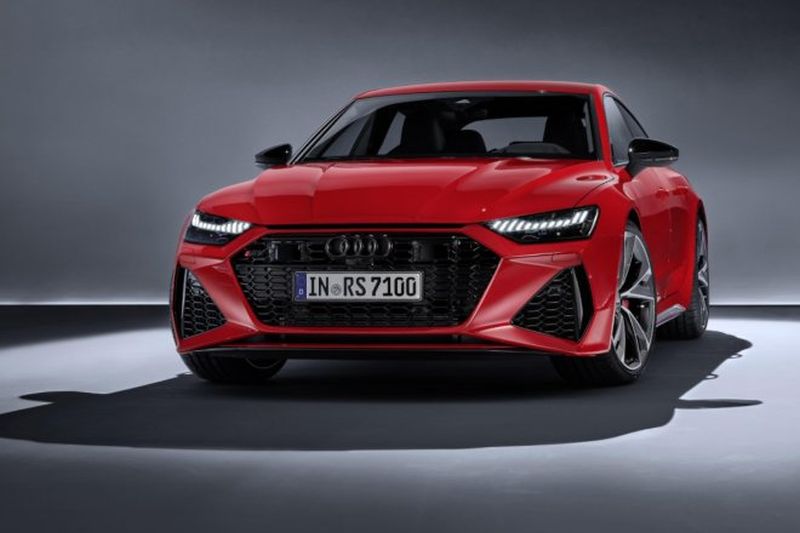 The Audi Sport’s reworked model will be showcased at the Frankfurt motor show 2019. It is expected to have a 5 cylinder engine, pumping out around 400bhp. The Audi Sport will retain the twin turbo 4.0 liter petrol V8 with upgraded power of 591 bhp. The exterior has some noticeable changes, as in chunkier wheel arches, bigger wheels and so on.

The RS7 Sportback with 600 bhp, automatic 8 speed gearbox and 80 kg lighter will be the hero of the show, in the sports car category.

The Audi A3 launch, which had been put off for numerous reasons including the WLTP emission testing and EV development, will be first launched at Frankfurt. The company claims it is going to be the most advanced car in the segment, setting new standards.

We will get the first glimpse of the S8 Audi Performance saloon as well as the SQ8 SUV and Q7 seven seater at the Frankfurt motor show 2019. 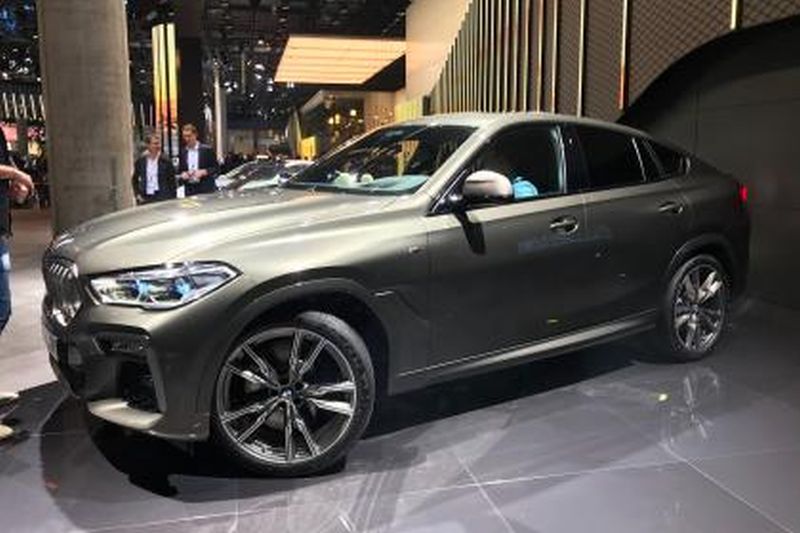 Though BMW has revealed the X6 previously, it has not yet made its public debut. The company will display it to the public in Frankfurt for the first time, before it hits the showrooms. The looks of this powerful coupe with a range of powertrain options is in tandem with the refreshed design language of the brand.

Vision M concept is a renewal of the M1 70s car. It packs a 591 bhp petrol, electric plug-in hybrid drivetrain which are also expected to be seen in other mainstream BMW models as well, in the future.

Cupra is the brand name for Seat’s performance brand which will showcase its electric vehicle concept. The design is in the form of a coupe – SUV, based on Volkswagen’s MEB architecture. Angular front end, rakish roofline and distinctive headlights is set to make an impression at Frankfurt Motor Show. 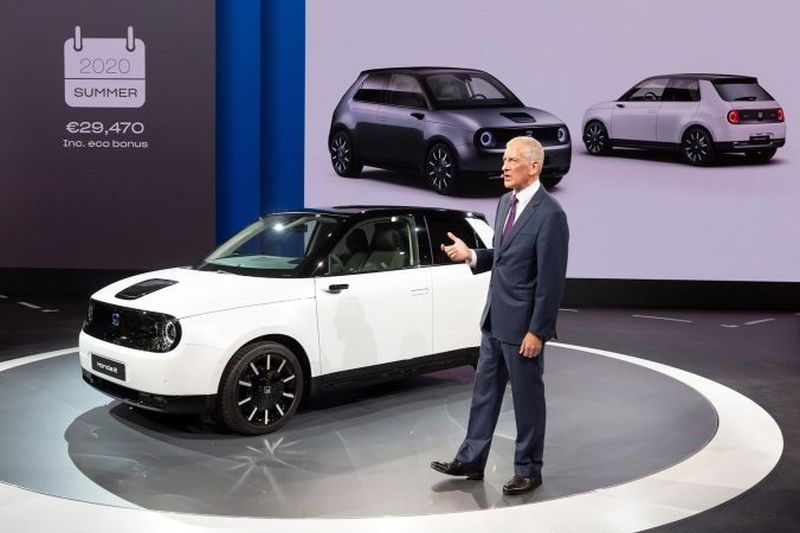 Honda revealed the E electric-city car in 95% production ready guise at Geneva in March, but the car will be revealed in its full glory at the Frankfurt show before customer deliveries start. Very little is supposed to change by way of styling from the earlier models. The Honda E has already generated a potential customer base of 6000 in the UK alone.

Lamborghini is launching a two million dollar hybrid ‘hypercar’ at the Frankfurt motor show 2019. The car would be produced in a limited quantity and will be displayed in public for the first time in Frankfurt. Code named LB48H, the car would have an aspirated V12 engine as well as electric motor to boost the efficiency and performance.