If you are currently in the market for a new car that is not only powerful but one that looks good and can be driven for daily tasks, you might want to consider the newest Mitsubishi Outlander to hit the showroom floors.

The Next Generation Outlander PHEV sports a reinvented visual appearance that pays tribute to its past while striking a route into the future for the SUV. Modern and intimidating, the design is brazen, presenting the brand’s progression from the moment you lay eyes upon it.

The new body and updated interior are just the beginning of how the Outlander has evolved. The new Outlander incorporates PHEV technology that offers higher electric motor performance and increased battery storage.

To find out more about the newest Mitsubishi Outlander coming to showroom floors, continue reading.

Even if you are not all that interested in cars, you can’t help but notice just how many Mitsubishi Outlanders are currently being driven around New Zealand. With how many there are on the road, it’s pretty safe to say that the Outlander is one of, if not the favourite SUV in all of New Zealand.

What makes the Next Gen Mitsubishi Outlander PHEV so different from the other Outlanders is it has combined the traditional Outlander with the new PHEV technology. The minute your foot hits the gas pedal, the new motors are making themselves known, delivering a burst of acceleration that makes it clear that Mitsubishi’s latest plug-in hybrid vehicle is not willing to compromise.

The vehicle may achieve an impressive full-electric range of more than 80 kilometres because of the increased size of the lithium-ion battery (20kwH) in the Next Generation Mitsubishi Outlander PHEV. This means for more than 90% of the commuters in New Zealand, there is finally an electric vehicle that can fulfill their commuting needs. Not only that, but when you combine the more than 80 km on the new lithium-ion battery with its ability to run on gas as well, drivers can expect a range of over 800 km. It’s one of the best things about not being a fully electric vehicle but a hybrid plug-in.

How to Charge the Battery 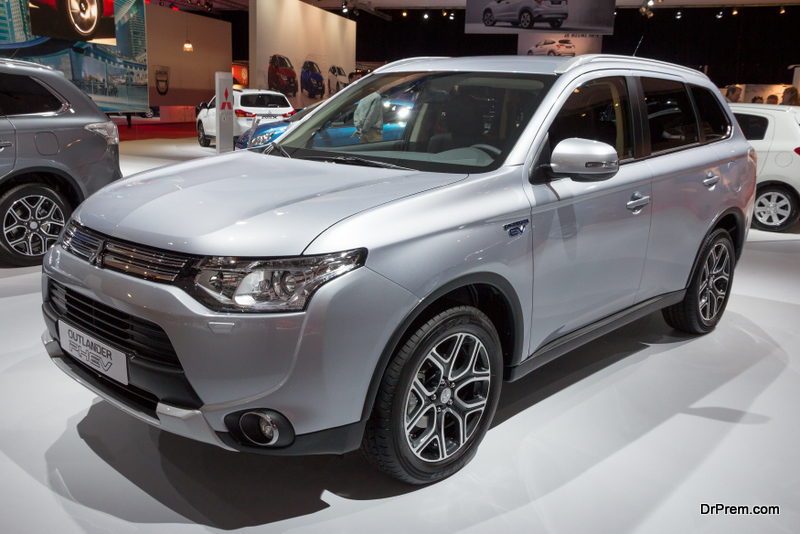 There are two methods for recharging the battery. The first method is to utilise a conventional electrical socket inside your home. Even though this is a more time-consuming charge, many individuals choose to charge their PHEV Outlander overnight when they are not using it. This will more than suffice for driving to and from work the next day.

The second alternative is to use a rapid charge station, which allows you to charge your battery while you are out driving. These charging stations are designed to charge the battery in a short amount of time. A fast-charge station can recharge your vehicle to 80% capacity in 20 minutes.

The Lifespan of the New Battery

In a plug-in hybrid vehicle, the battery’s life expectancy is totally dependent on how the car is utilised. Having said that, an exceedingly conservative estimate would be 160,000 kilometres.

Although this figure is useful, it should be noted that a properly maintained electric car’s battery is capable of much more than that. Many plug-in hybrid vehicles are still being driven around with their original batteries, even after driving around for a couple of hundreds of thousands of kilometres.

Looking at the Powertrain

The Mitsubishi Outlander PHEV, which will debut in 2022, is powered by a 4B12 2.4-liter MIVEC gasoline engine coupled with an S91 electric motor up front and a YA1 electric motor at the rear. The engine has a power output of 98 kW and a torque output of 195 Nm.

Looking at the Newly Updated Interior 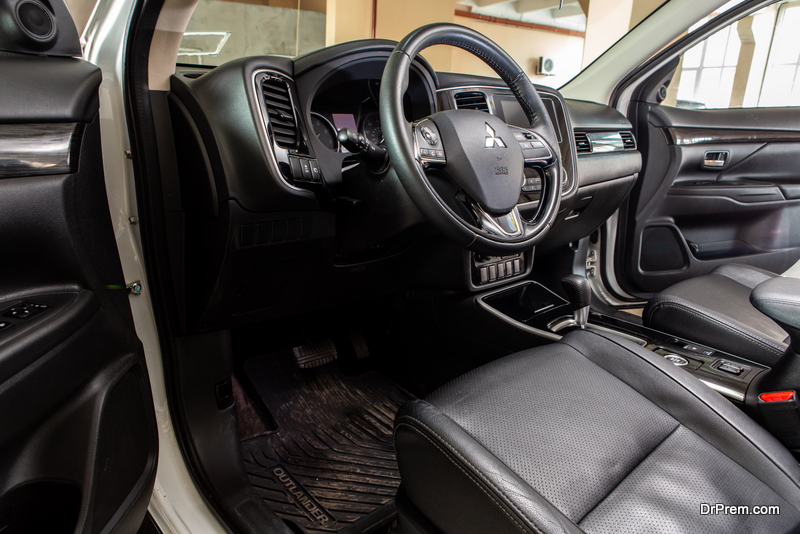 It is a big and comfortable environment inside the SUV, and every single touch point has been given thorough consideration. The use of improved, higher-quality materials is prevalent throughout the SUV’s interior and exterior. Every selection, dial, and switch has been designed to create a comfortable grip that appears to mould to the contour of your hand, allowing you to become completely immersed in the driving environment.

The horizontally sculpted instrument panel is complemented by soft-touch padding and a spacious centre console, all of which are intended to frame the gauges and monitors, which are reassuringly clear to read. All of the materials used in the Outlander PHEV’s interior are intended to make you feel comfortable and in command.

What you find inside the new Outlander PHEV will depend on the model you purchase. For example, the LS comes with five-person seating and dual climate control, while both the XLS and VRX seat up to seven people and offer triple climate control.

The LS is the base model of the newest Outlander PHEV to hit the market. Inside the vehicle, drivers and passengers will enjoy fabric-lined seats but not leather-lined steering wheels. The base model doesn’t have any fancy upgrades but comes with Wireless Apple Carplay Connectivity that offers an embedded sat-nav system.

With the XLS, customers are getting a model that falls in between the basic and the most luxurious of the Outlander PHEV. With the XLS, the synthetic leather interior comes with a leather-wrapped steering wheel, but not the convenience of a kick/power tailgate. This model allows for wireless smartphone charging, whereas the LS does not. It also offers Apple Carplay and a sat-nav system embedded within. 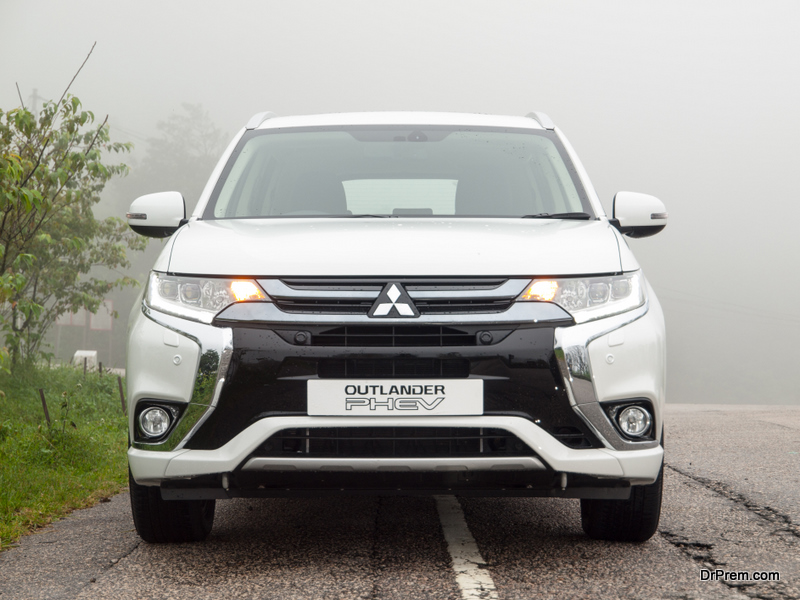 When you walk up to the new Outlander PHEV, you are going to immediately notice it. It was designed to stand out from other cars on the lot. The new dynamic Mitsubishi Diamond Shield, which you will see wrapped around the front grille, is accented by the new stacked headlight design. It is the Diamond shield and new headlights that will likely be the first thing that catches your eye.

This completely redesigned design is supposed to represent the progression of the Outlander. In addition to highlighting the powerful bonnet, the daytime running lights create a seamless shift to the wide horizontal accents that stretch from the front to the back of the vehicle.

The powerful proportions of the side profile are accentuated by a rich surface that is punctuated by crisp character lines. Finally, the design of the Next Generation Outlander’s tailgate, which boasts a hexagon motif that defines the tone for the rest of the vehicle’s rear end, brings everything together nicely. The horizontal taillights that reach both corners of the vehicle give the driver the sensation of steadiness and assurance.

The exterior is available in nine different colour choices, including Black Diamond, Red Diamond, White Diamond, and several more. Some colour choices are only available for the more luxurious models.

The Outlander PHEV is exclusively available in all-wheel drive, as indicated by the company’s Super All-Wheel Control badge. This plug-in hybrid vehicle is equipped with a two-motor, four-wheel-drive system, as well as active yaw control for the rear wheels.

This electric SUV even has built-in torque vectoring, which has everyone here quite thrilled to get behind the wheel of this vehicle. While driving the Outlander PHEV, drivers may choose from seven different driving modes to suit their preferences. The suite of active safety and driver aid systems, branded MI-Pilot, is included as standard equipment.

Does it Qualify for a Clean Car Discount? 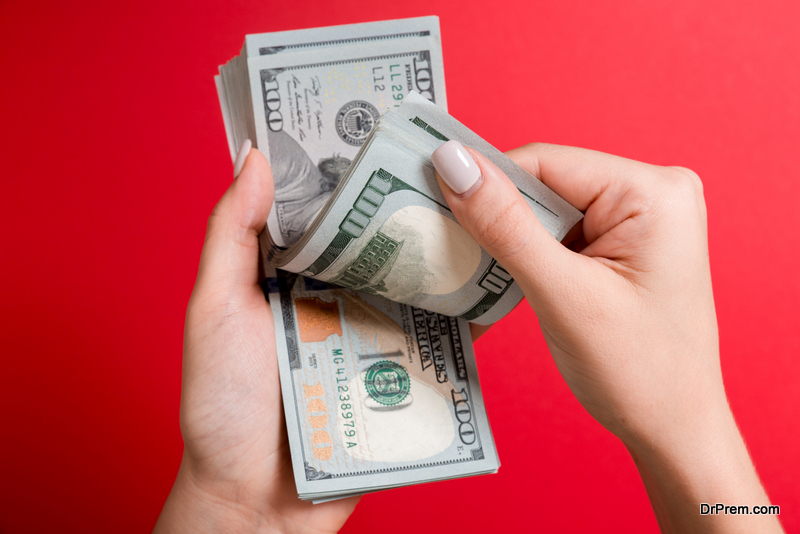 To encourage the use of low-emission electric vehicles in New Zealand’s transition to a low-emission future, the government has developed a program called the Clean Car Discount. This is a refund that can be used to offset the cost of purchasing automobiles that emit little or no pollution.

When Will it Be Released?

Mitsubishi aims to introduce the next-generation Outlander plug-in hybrid vehicle by December 16, 2021, in Japan. This is followed by Australia and New Zealand in the first quarter of 2022. Following its introduction in these right-hand driving markets, the business plans to introduce it in the United States between July 2022 and December 2022.

Mitsubishi has begun listing the next-generation Outlander PHEV on the company’s website in several areas. Customers in New Zealand, for example, can register their interest online and make a reservation with a small deposit of NZD 500, according to the company. The launch will take place in the first quarter of 2022.