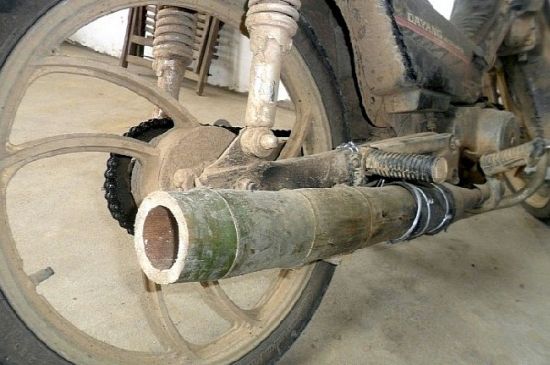 Bamboo bikes aren’t new, but how about using bamboo for replacing a bike exhaust. While many won’t have thought of using it for the purpose, but that surely doesn’t mean it’s not worth. Proving yet again that necessity is the mother of invention, a Chinese resident, Jen Fang, from the Chongzuo city in the Guangxi Zhuang province has got his bike silencer fixed with a bamboo pipe.

In a country with many billionaires but with many more poor people, Jen Fang was in the latter category and didn’t have ample funds to replace his bike exhaust and what he comes out with created ripples in the Chinese news industry when a local TV station noticed it.

When Fang replaced the bike exhaust with bamboo pipe, he was afraid it will burn soon, but to his amazement, it is perfectly fine even after covering many miles on it. What makes the Dayang bike even more enticing is the fact that it is quieter than the original exhaust that not only makes it eco friendly but cost effective too. The new alternative to metal exhaust system might not be appealing to many high end motorbike riders but it will surely get some attention from the aftermarket specialists.