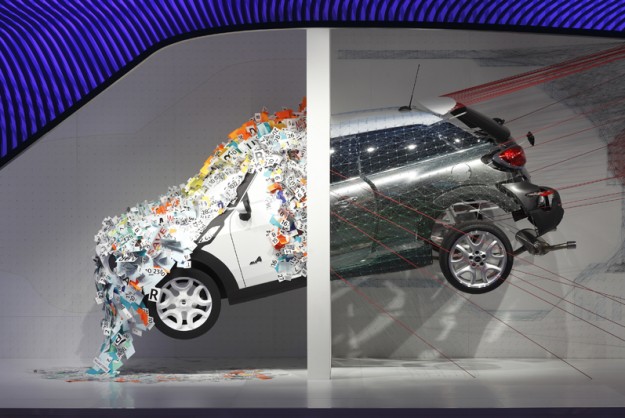 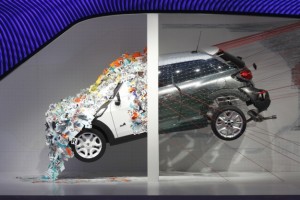 MINI KAPOOOW!, as they call it, a sculpture developed by a team headed by Anders Warming seemed to be the center of attraction at this year’s Salone del Mobile in Milan, Italy. Manifested as a two-part installation “Kapooow” is a first design of its kind that brings art and automotive together.

The sculpture divides Mini’s Paceman into two parts separated by wall, the rear is represented by the traditional chromed vehicle, while somewhere in the mid it transforms into colorful display of sculpted paper. The design celebrates the initial phase of conception and design of car prototyping and symbolizes the amount of creativity that goes into the process. The sculpture hangs in air with its two different parts separated by a wall that actually seems like a new dimension added to the Paceman.

Inspired by the Sports Activity Coupé, “Kapooow” certainly succeeds in caching your immediate attention. It is not only a visual spectacle but also a very creative concept that symbolizes how creativity brings performance, agility and form to automobiles. The art form intends to represent how products have emotional acumen and open a door to world of new experienced full of colors and vividness. In our opinion, it has been a marvelous effort on part on MINI and its designers in coming up with something truly out-of-the-box.

While MINI’s Paceman holds the center stage, the exhibition area has been dubbed as ‘wall of fame” with well-known film and cult personalities on one side of the wall and colored tabs with iconic Mini models on the other. MINI garage though had much more to offer with an on-site restaurant, a number of records on display, a MINI cinema and an on-site barbershop. The place intended to bring likeminded MINIacs together and developing an environment where ideas could flow freely.

Feel the spirit of your motorbike with wannbe-choppers