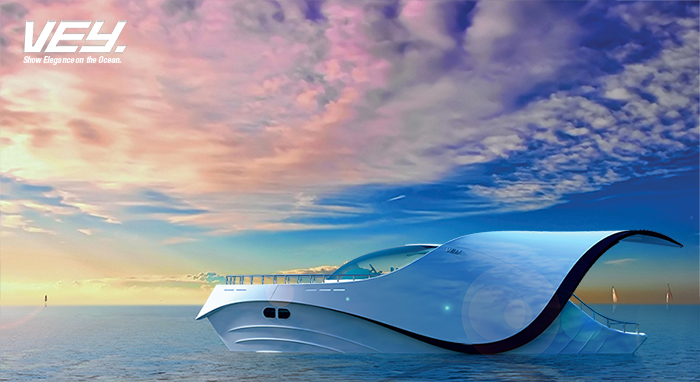 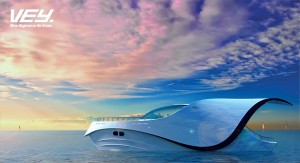 A designer from Korea has come up with a concept yacht inspired by knot of a scarf. Dubbed as Vey, it is an elegance yacht that embeds style into design while also taking into account the limitations of such design and coming up with a feasible version of such yacht. What differentiate it from normal yachts are its two elegantly designed flaps in the rear that curve inwards. The yacht looks like a creature with wings that belongs to the sea itself. The bottom of the yacht lights up in the night or evenings with red sky producing a mood lamp air. The backside of the yacht is sheltered by its flaps and provides the area for recreation where one can sunbath, dance or dine. The deck boards driver’s seat and resting table spaces beneath which lies the residential space. The yacht takes care of water drainage so that water can be easily flushed out of it.

The designer JungJunPark took his inspiration from the tail of knot of a scarf. He divided the tail into two roads attached on one end and added more curvature to design to make it more elegant. A touch of flapping side of scarf is added to the sides using flapping line as a character. The overall result is a winding structure that provides elegance as well as shelter to the rear of the yacht. The two flaps look somewhat like gull wings and an extra dimension to the overall design.

Vey takes its inspiration from nature and manifests the concept into something that seems feasible for production. It certainly distinguishes itself from the pack with its luring design. Moreover, Vey shows us a glimpse into the future when yachts will board gull-wings and transform from a sea-borne to air-borne transport, adding a whole new dimension to it.