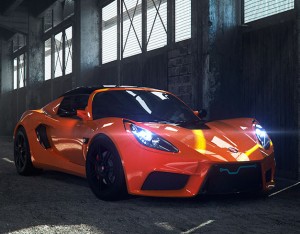 The Anderson Carriage Company first established in 1884, started their journey by manufacturing buggies and carriages until 1907, when it produced the Detroit Electric. However, it suffered badly during the Great Depression and sold almost 13,000 cars by 1939. Now, after a long gap of 70 years, the Detroit Electric has made an epic comeback with the all new SP:01, the fastest running electric car of the world.

This all-electric two-seater car produces 201-horsepower and a torque of 100 Ib-ft. Like the conventional mechanism of Lotus Exige, SP:01 also sends power to its rear wheels with its mid-mounted electric motor. Besides this, it is a lightweight vehicle packed with a 37 kWh battery, which is said to have been derived from the technologies used in submarines and helicopters. Moreover, paired up with a regenerative braking system, SP:01’s estimated range has been confirmed at 190miles on a single charge.

Sp:01 is quite different from other EVs not only due to its impressive design but also because of a number of new technologies that has been implemented in it for better performance. For example, it powers up its rear wheels by a unique transmission, which produces an electromagnetic field all around its rotor shaft thereby allowing you to spin at altering speed. It also provides you with the option of choosing between four ratios. On the other hand, due to the instantaneous torque of the motors, you can easily take advantage of its acceleration.

This new generation electric car with its high-speed performance has been predicted to storm the market of EVs after starting its production this August in Wayne County, Michigan. However, with the prices of gas going up almost every month, this new electric car can be a good replacement for your old gas engine car and is a great way to minimize air pollution. With its state-of-the-art design and technology, you are sure to get charmed by this car with just one glance.